How Presidents Affect Stocks: From the Whole to the Particular Over this past election season, the press has been riddled with headlines proclaiming “6 Stocks to Buy If Donald Trump Is Elected“, “Trump-friendly stocks fall as candidate comes unshackled“, “Best Stocks for a Hillary Clinton Presidency“. When it comes to the stock market, candidates have an ostensible sway over how the chips will fall. But the nuances of particular candidates set aside, it’s an observable pattern that election cycles have an effect on the stock market.

Looking toward the Stock Trader’s Almanac, Kiplinger reports that the first two years of a new president’s term are often marked by bearish markets and recession, whereas the last two years of a presidents term are marked by bullish markets and general prosperity. Along those same lines, it seems that the Down Jones Industrial has a history of increasing around 10% points in the year before a presidential election and 6% the year of an election.

The report goes onto say that, contrary to conventional wisdom, US stocks perform better under democratic presidents than republican ones–at least, since 1900. However, these gains are often drowned out in the great fluctuation of the market. 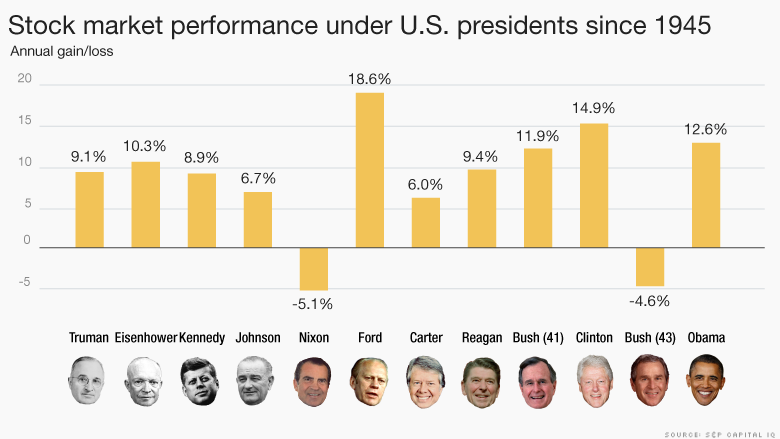 As a final conclusion, the report states that while the nuances of each president may not greatly sway the stock market as a whole, the converse is true. If the stock market is looking good in the six to three months leading up to election, the incumbent candidate stands a good chance of winning. So has been the case in 12 out of the 14 elections when that has been the case.

But what about when it comes to the particulars? If Trump were elected is Apple really what you should be investing in? And if Clinton is elected will Walmart really give you the greatest bang for your buck? Going ExxonMobil with a Trump presidency, a candidate who has espoused disdain for Green Energy, would make sense. As would going with Sun Energy for Clinton who has stated a desire to invest in Green Energy.

I have yet to really dig into the particulars of past elections regarding these nuanced inferences, but moving forward it will be interesting to track just how accurate (if at all) these numerous candidate-particular stock suggestions will end up being.

Speaking of candidates and money, Google’s Campaign Contribution widget is a game-changer for politics. How else will technology increase transparency moving forward?